The kindergarten’s current Unit of Inquiry focuses on families and in preparation for our school’s upcoming Grandparents’ Day we read, The Hello, Goodbye Window by Norton Juster. After reading this book about a little girl and her grandparents the students drew a picture of their grandparents. I suggested they think about what their grandparents looked like.  Did they wear glasses?  Have a mustache?  Have grey hair?  I think it helped some students key in and include these details. 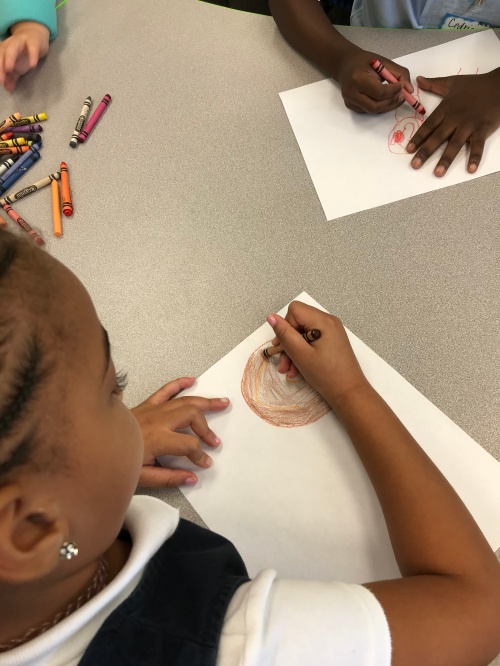 I created window frames by cutting a large piece of construction paper (12 x 18) in half and using a template cut openings with an exacto knife and metal straight edge.  A bit tedious but not complicated.

They glued on a window frame and created their own “hello, goodbye window.” 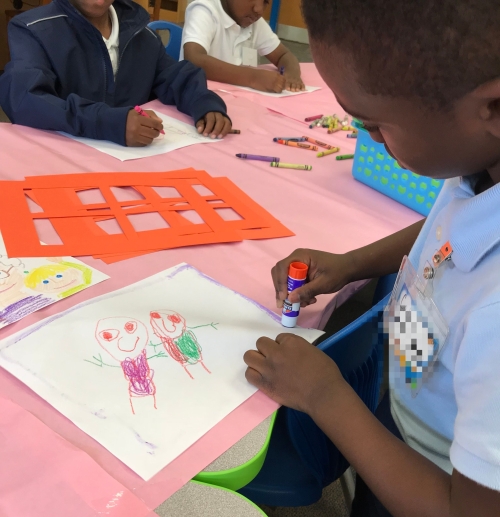 Sometimes inspiration strikes when you least expect it.  I wanted to design a lesson for first grade students to introduce them to a couple of historical figures they will be studying for their IB Unit of Inquiry.  Sometimes grades will also have what we call “stand-alones” or standards that don’t fit in with their Unit of Inquiry, but they will cover during the six weeks.

So I was looking to combine historical figures and magnets (their stand-alone science standard).  As I was mulling this over I remembered a box of business cards and magnets that my son left behind when he changed careers and moved to Atlanta.  So I have this box of cards and the magnets that can be adhered to make the business cards into a refrigerator magnet.  Bingo!  It came to me.  Have the students draw a portrait of one of the historical figures on the reverse side of the business card, peel off the protective sheet on the magnet, place the card on the magnet and you have a project! 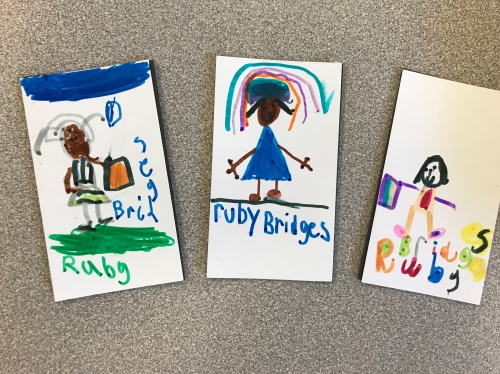 We are so fortunate that the state of Georgia provides libraries free access to some fabulous web resources including Britannica School Elementary encyclopedia via Galileo.  I projected the website on our large screen and we read some basic information about three of the historical figures from the social studies standards.

Georgia Standard of Excellence: Social Studies: SS1H1 Read about and describe the life of historical figures in American history. a. Identify the contributions made by these figures: Theodore Roosevelt (National Parks and the environment), George Washington Carver (science), and Ruby Bridges (civil rights).

I found several photographs of each of the individuals and placed copies on the tables so that students could refer to them.  I also included the names on each sheet so they would know who was who and how to spell their names.

After reading about these three people students decided who to draw portraits of and I had them include the name of individual on their drawing. 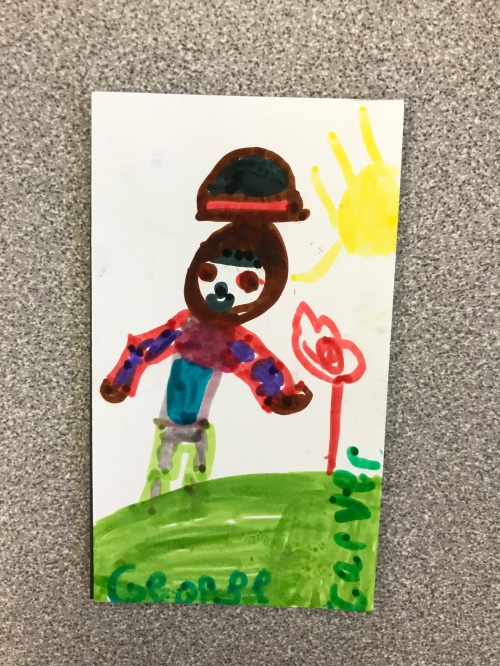 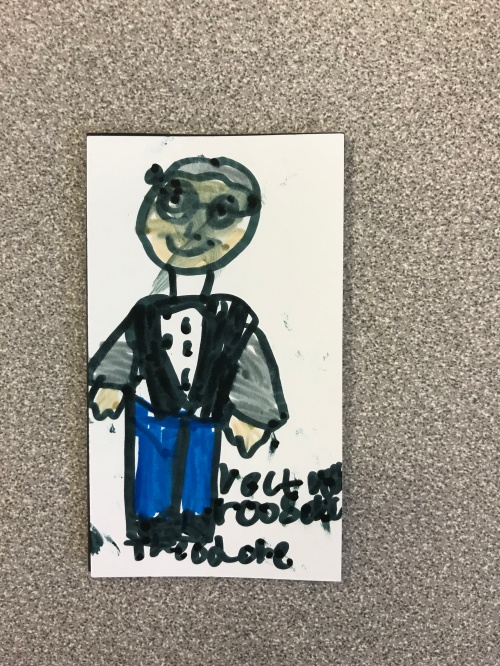 I helped them attach their drawing (business card) onto the magnet.  I set up a station of several objects for their magnet testing; cardboard, plastic, metal, glass, and wood. Fortunately I had a volunteer or a teacher to assist the children as they tested to see what the magnet would stick to.

S1P2. Obtain, evaluate, and communicate information to demonstrate the effects of magnets on other magnets and other objects.

The idea of International Day of Peace, LEGOS and the book, Chickens Build a Wall just sort of coalesced one night.  We were celebrating IDP with grades 3-5, but I needed a lesson for second grade.  Makerspace activities were also on my mind and I thought about Jean-Francois Dumont’s book, Chickens Build a Wall, which led to the idea of having students build a wall, which led to LEGOS.

Chickens Build a Wall  is about a flock of chickens who don’t act very peaceably towards a stranger who appears in the barnyard.  Students designed and built a wall using LEGOS to protect their chickens (represented by dried beans).  They then disassembled the structure which supports one of their Georgia Standards of Excellenc-Science:  S2P1 Construct an explanation for how structures made from small pieces (linking cubes, building blocks) can be disassembled and then rearranged to make new and different structures.

Many of our children have no experience building with LEGOS, so it looks like any reason I can find to let them build things will help them improve their fine motor skills, their creativity and engineering concepts. 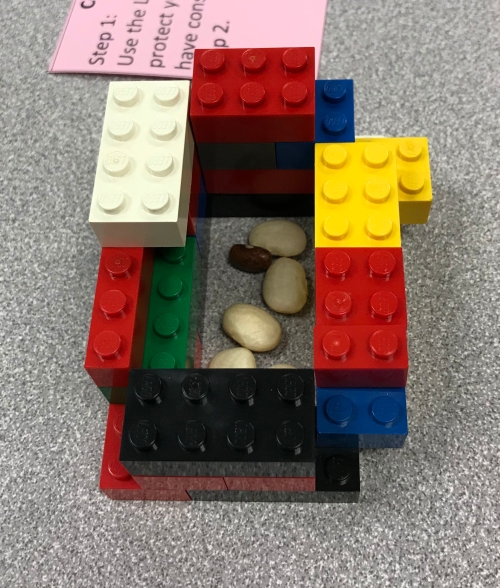 I usually have the third grade students use atlases a couple of times during the year.  I try something new every once in awhile and this year I made use of a huge stack on laminated United States maps we had in the library.

The third grade is required to know the location of several rivers for our state standards.  I designed a graphic organizer that the students would utelize to gather information about the location of these rivers.

We reviewed the purpose of an index and how to use an index and then I had them look up the rivers, noting the page of the map where the river could be found as well as the map coordinates.  After they listed all the page numbers and map coordinates, I had them work in pairs and using this information actually find the river on the map.  They were also required to list all of the states that the river flowed in or between.

Our students do not have a grasp of the names of the states or their locations.  Hey, it’s not a standard and it’s not tested, so it’s not covered.  I was hoping that the more time they spent looking at the map and tracing the rivers would pay off in a better concept of geographic locations.  This process took two library visits.

On the third visit the students used their completed graphic organizers and look for the states they had listed for each river.  They pretty easily found the states and then they could look for the river.  They had dry erase markers which they used to trace the length of each river.  Hopefully this practice with atlases and maps will pay off during testing and in other occasions when geography comes into play! 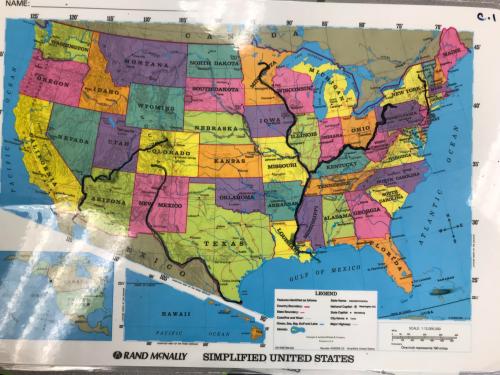 Second grade explores the Georgia Standard of Excellence, “SS2CG1 … the concept of government and the need for rules and laws” in their IB unit of inquiry, “How We Organize Ourselves”.  We read the book by Jeanne Willis and Tony Ross, Chicken Clicking, which explores the consequences of risky behavior in the digital world as a chicken gets carried away on the internet.

After reading this book the children suggested rules that would help keep them safe while they were online.

Fifth grade students study microorganisms and I want to expose them to forms of digital storytelling as well as give them a chance to practice those Communications Skills, part of the IB (International Baccalaureate) Approaches to Learning and Teaching. They chose a microorganism to research (virus, bacteria, ebola, red-tide, or brain-eating amoeba) and wrote a script to record using the app, ChatterPix.

I like to use a curating tool to streamline the research process.  This time I used Livebinders to gather reputable resources.

Limited to 29 seconds students had to carefully consider what information to include about their topic.  Students used their notes to write this script from the first person point of view.

Student taking a photograph of an image.

Students choose an image and take a photo of it to start the process and then record their script.  I don’t think students have enough opportunity to record themselves and reflect on their speaking and writing so I’m always looking for ways for them to hear their voice.

The Chatterpix videos were then uploaded to YouTube to share with fellow students, parents and the public.

Fourth grade students study planets (Georgia Standards of Excellence-Science S4E1. Obtain, evaluate, and communicate information to compare and contrast the
physical attributes of stars and planets)  They chose a planet or spacecraft to research and write a script to record using the app, Chatterpix.  Limited to 29 seconds students have to carefully consider what information to include about their topic.  Recording themselves is an important skill as they can hear what they actually wrote and they can then edit their writing (they realize their errors as they try to read their own writing).

I prepare a Livebinder of resources in order to supply them with credible resources and to speed up the process.  The whole process still takes about 3 plus library visits for each class in order to record all of the students.

I upload the videos to YouTube to give the students’ work a wider audience and the opportunity to share with parents and fellow students.

Link to one of the classes uploaded Chatterpix videos: https://goo.gl/WXqfK4

Creating Essential Agreement for the Library

I was inspired by Pam Weiger, who conducted an IP-PYP workshop, Making the PYP Library the Hub of Learning, that I attended in Bethseda last year.  She creates an Essential Agreement for the library every year.  In the IB program, class rules are created collaboratively with the students and teacher and everyone “agrees” to them. I selected book titles that I had seen on blogs, Instagram, or other social media. I read Froggy Goes to the Library to first and second grades, Troll Stinks to third grade and Nerdy Bird Tweets to fourth and fifth grades.

After reading the book each class came up with suggestions for how students should act and what they would do in the library.  The suggestions from the classes were combined to come up with “Essential Agreements” for the library.  I used our poster maker and printed a large poster and hung it just inside the door.

It’s great because if a student is running or breaking one of the agreements, I can point to the poster and read what they should be doing. 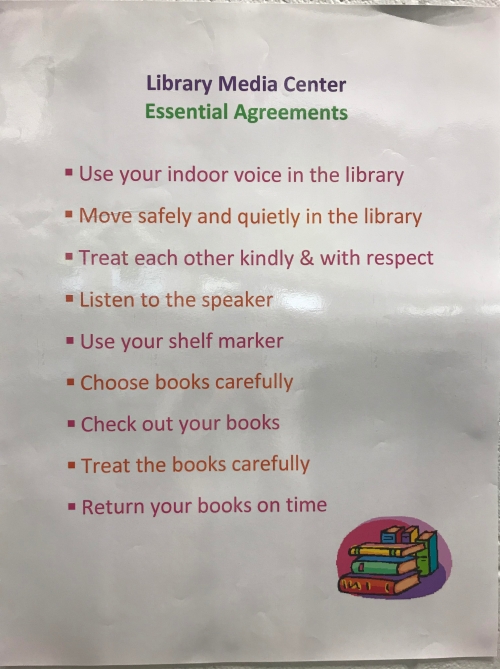 We did it!  I am celebrating International Dot Day again with our students and this year I did something a little different, creating one large art project.  I was inspired by an Instagram post by art teacher, Kristi Wenger; she did this display at her school.  First, I had to organize a lot of crayons!  This was time consuming, but very necessary.  Good thing I have a Bachelor’s Degree in Fine Arts!

Some other planning was involved to get the rainbow effect, but it was worth it.

I read Peter Reynolds book, The Dot, to every class and then each student created a dot.  Over 400! 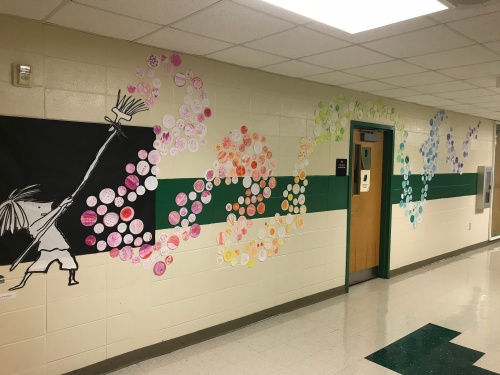 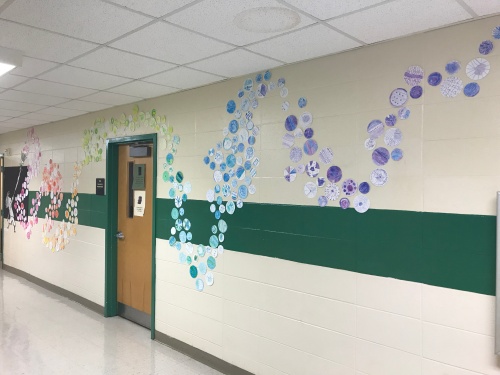 Learning is a journey. There is a starting point but no end.

There's a Book for That

Artisanal produce from our farm to your table

Suebrarian
Life in the Library

The latest news on WordPress.com and the WordPress community.