Science in the Library

I have been reading  Roald Dahl’s The BFG to my fourth grade classes trying to encourage them to read (and finish) chapter books. After several weeks and realizing that I wouldn’t finish before the end of the year, I bought 3 copies of the book from the bookstore and gave them to the teachers after they promised they would read everyday until they finished it (I will be checking with the students and ask for my book back if they aren’t holding to their promise).

Sooooo…what to do next?  I was thinking of some sort of hands-on, maker space sort of activity and with our school system’s science olympiad coming up soon, I looked at the state science performance standards.  As a judge for the science olympiad I know a laser light relay is one of the events and decided to set it up in the library.  This would also give the students going to the olympiad some practice. The Georgia Standard of Excellence: Science: “S4P1 b. Plan and carry out investigations to describe the path light travels from a light source to a mirror and how it is reflected by the mirror using different angles.”  I borrowed most of the supplies from our science lab, but did have to scrounge up 7 flashlights! 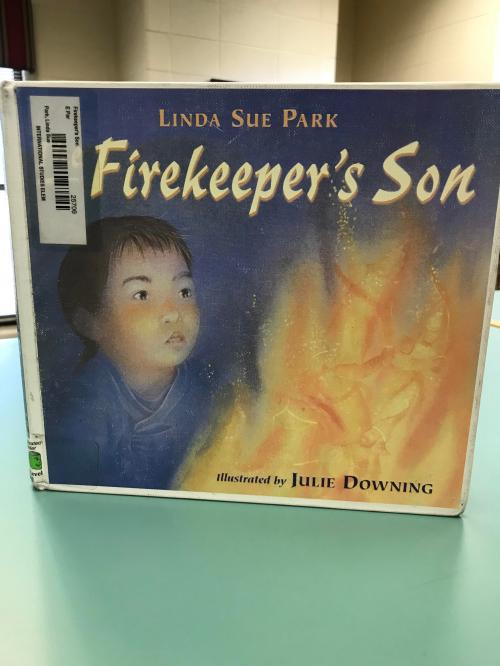 I remembered reading a book that had something to do with fires being lit in a relay along mountain tops and after some key word searching in our school library catalog and came up with Linda Sue Park’s book.  I read her book, Firekeeper’s Son, which tells the story set in Korea in the 1800’s which relied on a series of firekeepers atop mountains who lit fires from the coast to the king inland at his palace. If the fires were lit, then there were no enemies invading from the sea.  The students became “firekeepers” using a flashlight.

Students worked in small groups and each had 3 mirrors, a flashlight and a photo of a Korean palace (where the king lives).  They had to use all three mirrors to aim a beam of light onto the palace. So they were “firekeepers” relaying the message via mirror to the “palace” so the king would know all was well, no enemies in the land.

It really wasn’t a science lesson, but I just wanted to give the students an opportunity to play around and figure things out for themselves. I don’t think they have enough time with hands-on activities.  After they were successful with the mirrors, they had three prisms to work with. This was also another chance for them to practice team work and social skills. They were so excited and had a great time and they might just have learned something! 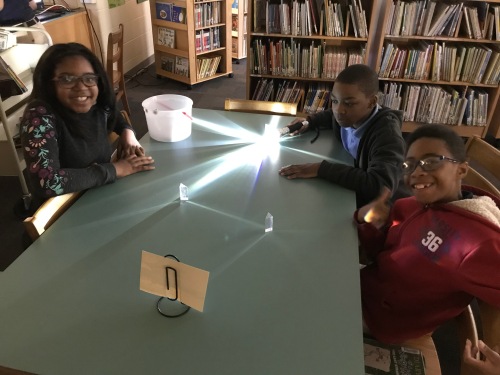 Third Grade-My Teacher Is a Monster

I really like Peter Brown’s book, My Teacher Is a Monster and one night in the early hours I woke up and was mulling over how could I come up with an activity that would go along with the book.  All of a sudden I thought “What is the opposite of a monster teacher?”  Answer: a perfect teacher!  I wanted to combine several concepts: the IB’s Approaches to Learning-Social Skills (formerly known as Transdisciplinary Skills), IB-PYP Profiles, writing practice and art work.

I read the book to the classes and it was very popular with the third grade students.  Some students noticed that the teacher gradually changed from a monster to a more human form.  This gave us the opportunity to make a connection with a IB concept-perspective.  They decided that she didn’t really physically change, but Robert’s view of her did change.

I told the students that they would work in groups to create a “perfect” teacher.

I created a graphic organizer which combined the IB-PYP Profiles and Attitudes, adjectives, verbs and activities.  Each student received a copy of the graphic organizer and were instructed to brainstorm independently.  I also placed thesauri on the tables and reminded them that if they needed a more interesting word they could find a synonym in these books. This is as far as we got the first week. 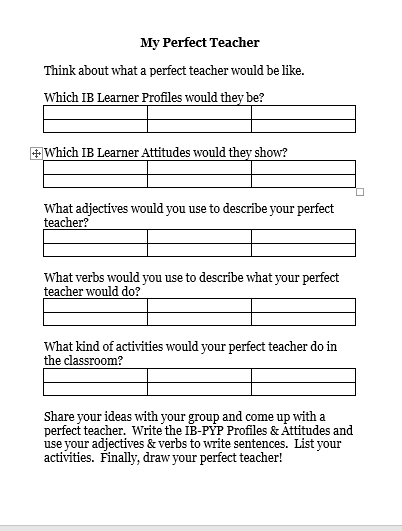 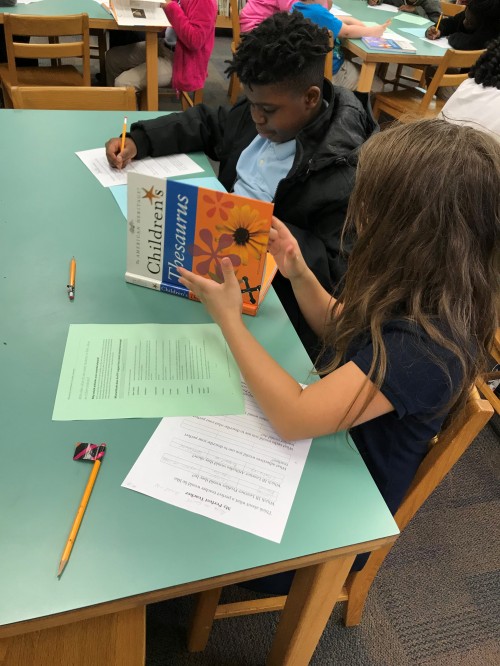 I downloaded a PYP Transdisciplinary Skills Toolkit from Mary’s Store on Teachers Pay Teachers (free) as it had each group of skills contained on one page with student-friendly font and text.  I made copies of the Social Skills and laminated them.

The second week we started by reading the Social Skills of the IB’s Approaches to Learning.  I filled up my tables (which seat six) and each student had a copy of the Social Skills in front of them. They did a round robin reading of the skills and had an opportunity to discuss and ask questions.

I divided each class into small groups of three groups, adjusting for personality conflicts or behavior.  After reading the Social Skills I moved the students so they were seated with their group and they began comparing the attributes of a perfect teacher.  This gave them the opportunity to practice those Social Skills! 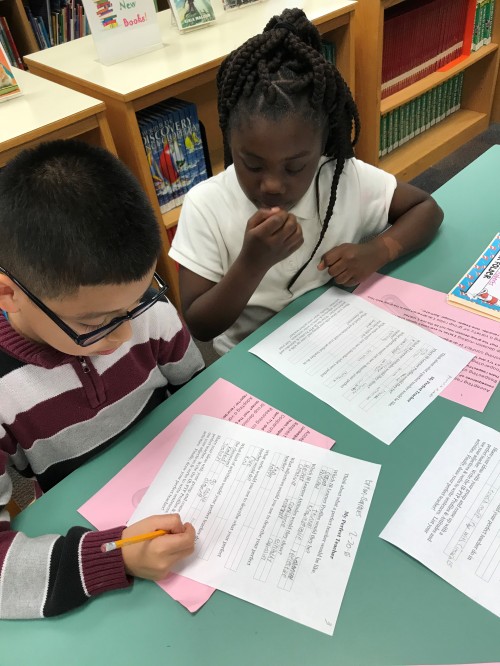 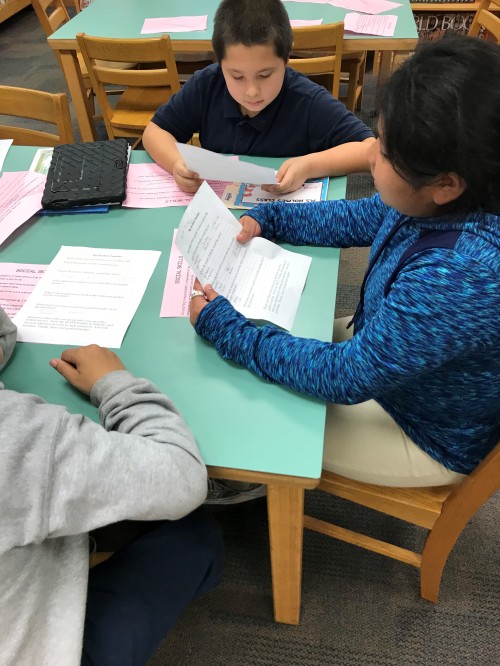 In week three the students finally got to what they called “fun.”  I gave each group a length (about 36″) of white butcher paper and a container of crayons. I drew a head, two hands and two feet on each sheet to give them a starting point for their drawing.  They were reminded of the Social Skills that were reviewed the week before to encourage a positive group experience.  I told them that all of the words on their graphic organizer had to appear on their creation.

Several students said after this session that it was so “fun.”  Judging by the conversation and energy in the room, it was a positive beginning. 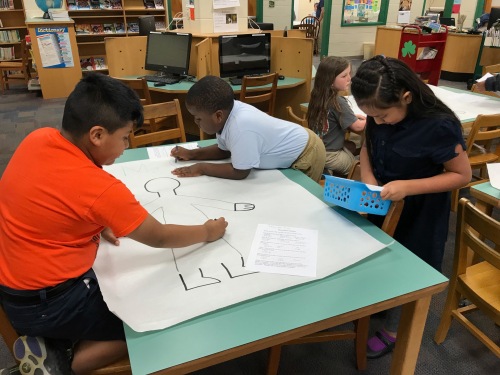 I gave the students about 20-25 more minutes on their fourth visit to complete their drawings.  They were having such a good time and for the most part working well in groups. 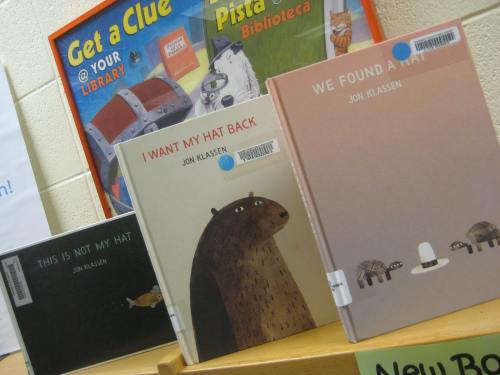 I did this series of lessons last year and the students and I enjoyed it so much that I decided to do it again!  I “borrowed” the idea from Jennifer Reed.  I read about it on her blog, Reedarama (https://goo.gl/HMzc4G).

I like to give students as many opportunities to write when they visit the library as possible.  With first graders just reinforcing the idea that “sentences start with a capital letter and end with a punctuation mark” is good practice.

This Is Not My Hat: Week One

I love this book and so do the students.  When I read the line, “I just stole it”  there are usually several children who just gasp. They are so innocent.  After reading the book I ask them how they think the big fish got his hat back, after all we don’t see the action amongst the plants.

I fold copy paper into thirds and have them write their response on the top one-third.  They use colored pencils, which they really like.  The directions are to first write your sentence and then illustrate it.  I find that some students need a lot of prompting to think creatively.  Perhaps that is because we don’t give them as many opportunities to think outside the box as we should.  There are no right answers here, just your own opinion. 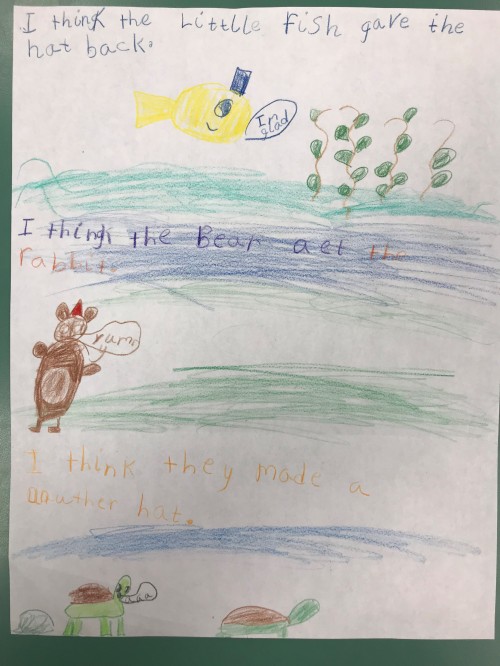 I Want My Hat Back: Week Two

Translation: The bear “snatched” it off.

We Found a Hat: Week Three

After reading this title I ask the children how the turtles resolve the problem of having only one hat.  This really stumped a few students.  One girl (bless her heart) just kept repeating, “There are two turtles and they have one hat.”  After much discussion I desperately grabbed two pencils and said, “Let’s pretend there are two girls and they only have one bike (I used a book to represent the bike).  How will they solve this problem?”  Finally the light bulb went off and she said something like, “They take turns.”  Break through!  This just reinforces my idea that we don’t let students problem-solve like we should. 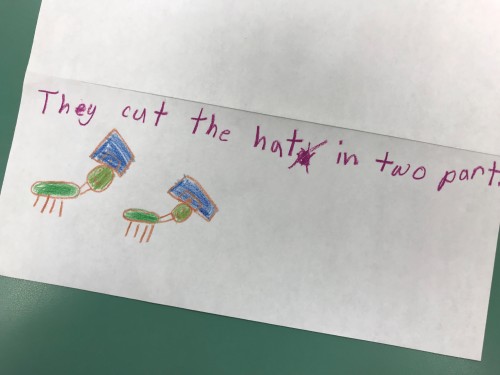 We had one session brainstorming global issues and one about responses to problems (action), so we thought it was time to remind students of how they were to approach the PYP Exhibition by looking at the IB Learner Profiles (and Attitudes).  Students see these words posted in every classroom (and the library), but how often do they really think about what they mean? 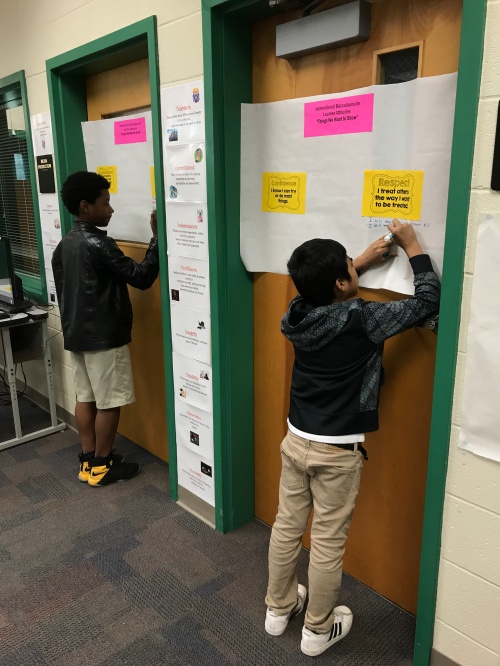 We had the students start by sitting at tables with two sheets from the handbook, Making the PYP Happen, which lists the IB Learner Profiles and Attitudes.  With brief oral (and written) instructions they began to walk around the room.  We did add one additional directive: add your initials to your comment (that way we could check in with the student for clarification, encouragement, etc.).

I posted the profiles and attitudes on large sheets of paper around the library.  Each student had chosen a marker before hand and they were free to wander around to decide where they would make their comments. 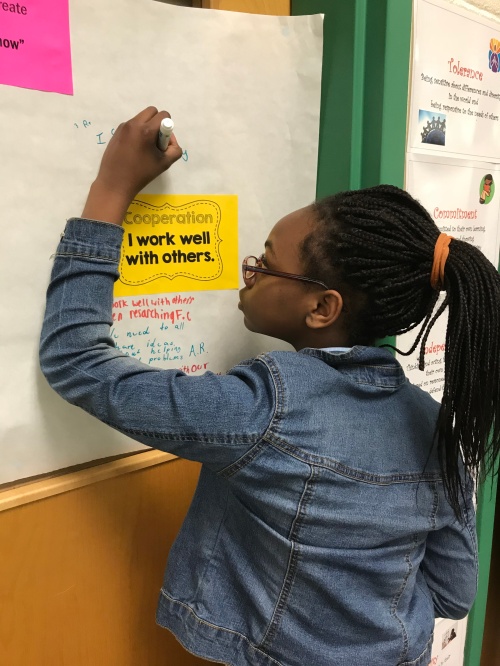 All in all I think it was a good opportunity for these 5th grade students to take the opportunity to think about the profiles and attitudes and what they look like in a given situation and apply this knowledge to the exhibition process.

I will think about how to use this activity with other grade levels through out the next year as I believe it is a useful exercise to have the students reflect on the profiles periodically and methodically.

Learning is a journey. There is a starting point but no end.

There's a Book for That

Artisanal produce from our farm to your table

Suebrarian
Life in the Library

The latest news on WordPress.com and the WordPress community.